But our values are “civil and digital liberties, social equality and freedom of culture”

Is there any compatibility to help with the Yes campaign, despite being a sub-optimal situation in the first place?

Obviously passing up an opportunity to improve equality in the expectation that we’d then be able to push our preferred approach is a massive act of hubris.

I think we certainly can get behind suboptimal solutions as long as we’re improving on the present situation, which the Yes campaign does.

It’s not that we don’t support marriage, it’s that we oppose government having any say in what marriage means.

Marriage should be protected not by excluding particular individuals, but by excluding the state. This would return marriage to the community, to be interpreted by all in line with their own traditions and values.

It’s not that we don’t support marriage, it’s that we oppose government having any say in what marriage means.

yep. I knew that! just typed it out a bit too quickly to miss some words

I think there’s scope for a Position Statement here, or at least a press release.
To be released at conclusion of the high court challenges.

If the HC lets it go ahead:

“This is a civil rights issue. While our position goes further, the proposed changes get us closer to equality. We’re not going to pass up an incremental improvement once it’s here (even if the mechanism is daft). Vote Yes.”

If the HC cans it:

“This is a civil rights issue, it shouldn’t even need to be voted on in this way, we’re glad the HC canned it. While our position goes further, there’s no reason Parliament can’t make incremental improvements now.”

Probably nice to have a pad so we can crank something out nice and quickly no matter what happens, should we decide to do a PR:

quick and easy picture to go with it (whichever way the decision goes, still works): 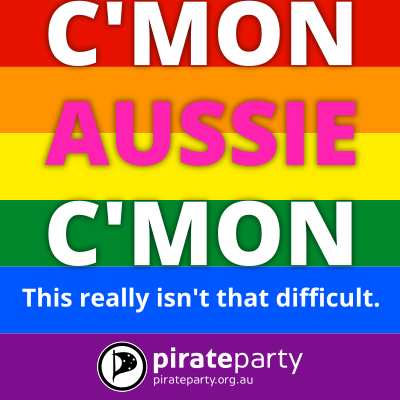 edit: @Frew I took your like as implicit approval

edit: @Frew I took your like as implicit approval

High Court have ruled that the survey can go ahead…

Which means a press release now would be a Good Thing™ … before the survey begins next week.

It’s ready to go (now that I’ve fixed my own deviations from the PR style guide, lol).

Y’know, the Press Team could do with some more people. @StAlRuth, @Ben ?

Of course it could … and I may even have time to consider such things after this year’s PAX. Maybe.

@alexjago can you push that artwork up to the repo, I’ll stick my auth on it.

Let’s get the PR done now! So we have something to go on socmed ASAP

Sure, I’d be happy to lend a hand

Artwork pushed. I don’t think this one actually needs an auth tag anyway…

Be sure to message me if any part of the rendering process is problematic.

The pollies are discussing law changes around auths in the media this afternoon for this vote, so might be best to add our on things we share just to be safe.