The Age of Political Entitlement

TL;DR: Our politicians are among the highest paid in the world. Base salaries of various types of MP are quoted (~$195K for a backbencher, $368K for a cabinet minister, ~$539K for the PM). The article finishes with:

The real question is how do we fix that?
Sortition? Electronic liquid democracy? A larger Parliament? Ratios/affirmative action?

While Electronic Liquid Democracy is our preferred method, we also note its difficulties in implementation, See our attempt of such a system: Polly

Another method is the application of sortition in combination of ratios i.e. after the election, consult the Census/Department of Human Services databases and randomly select from the electoral roll, enough people to get a more diverse parliament.

I am being very naughty here; but if every politician were to become an “employee” of (say) the appropriate Governor/Governor-General, and subjected to performance reviews/enterprise bargaining (i.e. all the indignities of “normal plebs.”…)

Oh P’EXPLETIVE: coalition members of a new politician’s union? Genii! back into your bottle! Please?

Well that’s the second union that the senior Liberals may actually want to join, the first is the Australian Rugby Union!

Assuming we have to have a parliament, I’m liking the idea of some form of sortition, for example:

This gives each member a four year term, and ensures appointments are staggered such that the parliament is never completely full of noobs. Assuming a truly random distribution, the parliament if large enough will automatically be quite diverse. Also, appointees who are poor will get to experience being rich for a few years, and vice versa.

The current lot would never sign up for this though.

This is quite interesting, because I’ve always considered what the relevant of a bicameral parliament would have if the lower house were elected by proper proportional representation, and how there could be a fair house of review.

If we had a lower house that was PR, and an upper house that were based on sortition, we’d have an honest house of review, and a representative house for governance.

This is really quite an interesting direction to just consider.

Some of those stats are a bit… unjustified.

Of course MPs don’t live below the poverty line, because almost no full time employee, even on minimum wage, does. A better stat would be to look at median wages of politicians before entering parliament. It would probably make the same point.

As for the proportion of lawyers, that stat is true, but in my opinion, not unjustified. I don’t defend the actions of MPs in passing bad legislation, but I do want the people who are passing it to understand how it works and how it’s applied. I want to know that when bad legislation is passed, I can criticise those who passed it for the arseholes they are, rather than for being merely uninformed and uneducated. I can’t speak for the motives of current MPs, but I did a law degree while working full time specifically in order to be able to take part in that process from an informed position, on the chance that an appropriate opportunity ever arises.

I wonder if we can vote on how much politicians ought get paid?
When they’re doing shit, they might be voted to get, i dunno, a teachers salary, and when they’re doing better they might get voted in a raise? is this a democratically prudent idea? or half baked thought bubble? apparently now, their salary is meant to be worked out independently, but it seems we go into more debt with little to show for it and they still get a raise?

On sortition (random selection of citizens for parliament), Designing Open Democracy actually had a presentation about it with Nicolas Gruen and Hubertus Hofkirchner. Recordings and notes is available below: 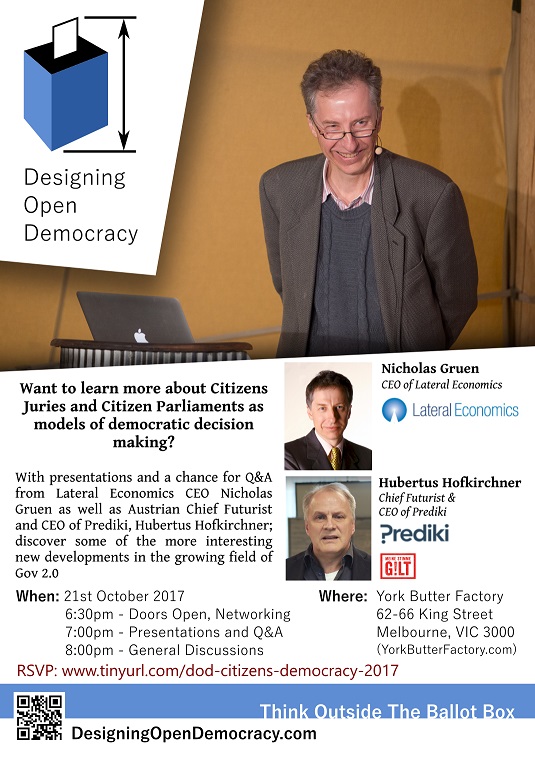 Thanks, I will take a listen.
I added my idea to the bottom of that google spreadsheets list under PollyPay, ‘the people set the pay of politicians’.

The idea being that a decentralised price system like this by itself (even before implementing other direct democratic oriented ideas) will incentivise politicians to make better policy for the people, instead of only crony policies for a select few.

Of course it is true that the crowd are not expert at details of policy, but the idea is that, just like the people are good gauges (the pub test, plebiscites) for ethical ideas then they can still be a better gauge of overall political performance than an “independent” centralised corporation that only listens to the top end of town including polticians themselves.