edit:
I started an etherpad here. Thought it might be helpful to have a shaded doc that might, some time, look like a considered reply. https://pad.pirateparty.org.au/p/PPAU_Budget2016_Reply
/edit

I can’t imagine how difficult or time consuming it must be to analyze, compare and comment on the budget. I wonder how much energy goes into the Labor reply. Yeah, I know, an army of minions … But that worries me. Surely a reply should be given more consideration than a few days. I notice too that anyone not in government is, of course, not happy. And I suspect there’s a bit to be, not happy about.

This caught my eye …

I think this is bad. What would FTTP cost and how would we pay for it?

From the Pirate Party Wiki.
https://pirateparty.org.au/wiki/Platform#Support_for_fibre-to-the-premises_infrastructure_projects

The current copper network is not sufficient to meet the requirements of a growing digital society. A fibre-to-the-premises infrastructure project that connects the majority of Australians to a fibre network, where economically feasible, is fundamental to the creation of a vibrant digital society in Australia.

I’m not good with numbers so I ask you, fellow shipmates, what do you think of the budget? Is there anything specifically you think is good or bad? What might be the Pirate Party reply?

What does the National Executive think of the budget? Tax reductions for corporations do not make sense. We already rank below average when it comes to the size of our government compared to other...

The huge gap is that housing speculators will still get tax breaks and use of negative gearing. No other country favours housing speculation in this way. Speculation is not investment and its losses shouldn’t need to be offset by taxpayers. We really need to stop sacrificing our labour, our productive economy, and our savings at the altar of the housing market. We’ll only ever have the same amount of land no matter how much we spend on it. If we want the economy to do better we should be directing our funds to productive things which we don’t already own.

We would also like to see a proper FTTP NBN. It will create an asset which can sold to recover much of the funds. Whatever costs remain will be more than met by the benefits.

Some analysis is revealing the mooted HECS change to instead consider household-income to be a bit of a nightmare, mostly depending on the threshold. Clearly if there is to be a ‘household’ threshold it should be significantly higher than the personal threshold, and also be limited to parents and partners and the like.

In particular, there needs to be worried about (possibly single) parents retraining once their kids are old enough.

For a side note, a budget surplus could be restored in one year by:

Not one tax rise needed.

I pulled these number together. Added to the etherpad. 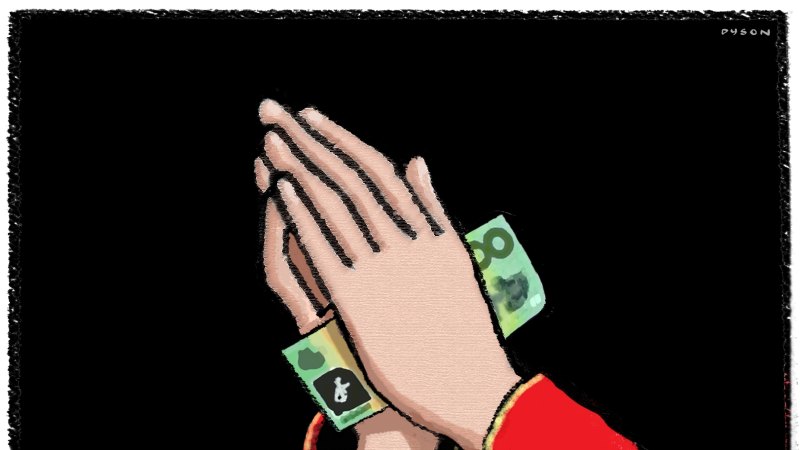 Religion's tax break is a cross we shouldn't have to bear

Religious groups are not taxable. No wonder there’s no transparency in how their billions of dollars are spent.

That is all. mic drop.

Responding to the specific case of funding a FTTP NBN, could money be saved by scrapping, recycling or selling the existing copper as it is replaced? How much is Telstra’s copper network worth and can it be acquired or otherwise utilised in such a fashion?

Alternatively, what about bringing in a third party (such as Google fibre) and contracting the job out to them? It could be done in a similar way to the toll roads, where they are given exclusive rights to rent out or charge for use of the network as they see fit, on the condition that it be sold or otherwise turned over to the government after a set date. This method has the advantage of minimising or even outright avoiding the initial upfront costs but could conceivably result in the government being forced to purchase an outdated or derelict piece of infrastructure should it be mis-negotiated.

David, while I like your suggestions I think you need to consider the political influence of the Australian Christian Lobby, The religious vote is relatively small but very vocal and selling this to them would be difficult. (but perhaps not impossible…)

Although the superannuation tax changes are a modest step in the right direction, unless you also wind back negative gearing and the capital gains tax discount, the effect is to create an even greater incentive for high income or wealthy individuals to continue inflating the housing bubble. People complain about the constant tinkering with superannuation, but I don’t think the country can afford to continue with the status quo as created by the Howard government during the mining boom. It would be best to have one ‘big bang’ reform that put the system onto a fair and financially affordable basis for the long term, ideally with the agreement of all sides of politics.

David, while I like your suggestions I think you need to consider the political influence of the Australian Christian Lobby,

Attitudes are changing about organised superstitions and many humans are quietly rejecting them. What you hear from the ACL are death echoes of last century thinking and vast herds of internet apes are seeing the cost of “religious privilege”. Of course, so does the Pirate Party. From the Tax and Welfare Policy…

Remove ‘advancement of religion’ as a charitable activity for the purpose of determining tax exemption.

The religious vote is relatively small but very vocal and selling this to them would be difficult. (but perhaps not impossible…)

The “religious vote” isn’t the audience. The audience is the “none’s”, those electronic apes relieved of dogmatic servitude by: internet. We need to be louder, and smarter. $30 billion income from this Charities Act reform could just about pay for a new FTTP NBN, each and every year. Q. In Australia, religious organisations are not required to pay taxes. Do …

How much is Telstra’s copper network worth and can it be acquired or otherwise utilised in such a fashion?

The short answer is “Bugger all” as the majority of the cost comes from labour, not materials and has all ready been factored into the costing of the roll out as most of the time they just slide the fibre in alongside the copper before taking the copper out.
Telstra also cannot be forced to handover or sell its existing network which is why the original plan was to build a new network from from scratch without their input.

Alternatively, what about bringing in a third party (such as Google fibre) and contracting the job out to them? It could be done in a similar way to the toll roads, where they are given exclusive rights to rent out or charge for use of the network as they see fit

Australian anti-competition/monopoly laws do not allow for this sort of thing and in the case of tolls, all the money goes back to the government, not to the construction companies as they tender to build the project for a fixed cost.

Defence spending - excessive. The goal of defence funding at 2% of GDP is spurious. Spending $50 billion on custom-made orphan boats that won’t be completed until 2060 is a bad idea. Technology moves too quickly and the later boats will be obsolete before they’re built. Buy subs off the shelf at half the price and dispense with the JSFs. Shift the savings to foreign aid and seek to build security by reducing poverty in our region.

It is ridiculous that the US and UK are predominantly investing in research on new types of armoured vehicles to protect ground troops from IEDs and RPGs and we are spending billions buying into a second rate jack-of-all-trades semi-stealth fighter.

[quote=“David, post:1, topic:763”]
… What would FTTP cost and how would we pay for it?
…[/quote]
Probably less than a dollar per week. There’s no reason it couldn’t pay for itself.

How the numbers come out depends on how they’re spun. My spin is at http://david.boxall.id.au/201604/#Whitheropticalfibre