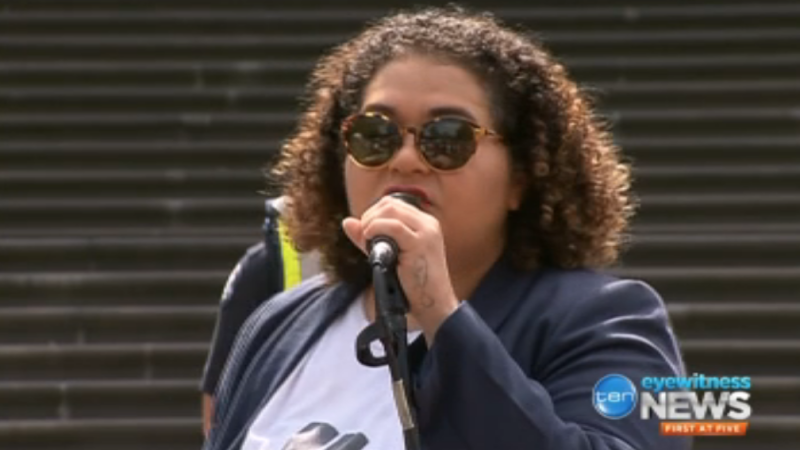 'Invasion day' rally organiser Tarneen Onus-Williams does not apologise for saying she hoped Australia would 'burn to the ground' but says her words should not be taken literally.

’Invasion day’ rally organiser says her comments Australia should ‘burn to the ground’ should not be taken literally
Melissa Cunningham, Adam Carey

“Invasion day” rally organiser Tarneen Onus-Williams does not apologise for saying she hoped Australia would ''burn to the ground" but says her words should not be taken literally.

Ms Onus-Williams stood on the steps of Victoria’s Parliament on Australia Day in front of thousands of people and told the crowd: “F— Australia, hope it burns to the ground.”

“All you fellas in your Australian flags should be ashamed of yourselves.”

Ms Onus-Williams, 24, has since moved to clarify her comments and said her words were a metaphor for the political system in Australia that continued “to ignore and oppress” Aboriginal people.

"It’s been an emotional day and it was a strong statement, but I am not going to apologise for it,” Ms Onus-Williams who identifies as a Yigar Gunditjmara and Bindal woman said.

"It was a metaphor, not actually a statement to be taken literally. I just want everything, all the governments to fall apart, because our people are dying and nobody cares and the whole system needs to change. The leaders of this country continue to ignore and oppress us. I am sick of our people getting locked up and dying in custody, of our young people suiciding.”

“I don’t have all the answers of what is going to liberate us. I just know the current system isn’t working. Since colonisation nothing has worked for blackfellas on this land."

Ms Onus-Williams was an early member of ongoing treaty talks in Victoria.

She was appointed in 2016 to the Victorian Aboriginal Treaty Working Group, as a nomination of the Koorie Youth Council, but is no longer involved in the treaty process, which was set up between Aboriginals and the Andrews government.

Ms Onus-Williams is an executive member of the youth council, which is funded by the state government and promoted Friday’s protest organised by the Warriors of the Aboriginal Resistance.

Ms Onus-Williams said she understood her comments may have caused offence, but did not want them to draw attention away from the estimated 60,000 people who flooded the streets of Melbourne’s CBD in solidarity with Aboriginal people.

“It was the biggest protest for Aboriginal people since the 1970s and I am just so proud of our community and of everybody else who came out with us today,” Ms Onus-Williams said.

“I would hate my comments to deflect from that.”

Many of the marchers dressed in black to symbolise the mourning felt by the Indigenous community.

Friday marked 230 years since the establishment of a British colony in Australia and the demonstration remembered the 80th anniversary of the first “day of mourning” in 1938, when Aboriginal people walked in silence to protest the “callous treatment of our people by the white man”.

A spokesperson for Greens MP Lidia Thorpe, the state’s first female Aboriginal elected to Parliament, declined to comment on Ms Onus-Williams’ words but said: “January 26 is a painful day for our people, we’re hurting. It’s painful to see people celebrating while we’re in mourning.”

A spokesman for Victorian Premier Daniel Andrews said while everyone had the right to express their view it should always be done peacefully.

“That’s one of the great things about our democracy and what we celebrate on Australia Day,” he said.

He also attacked the Greens and Labor for opposing celebrating the day on January 26, although Buninyong MP Geoff Howard is the only member of the Andrews government who has said publicly that the date should change.

“The Greens and Labor left-wing opposition to Australia Day is an example of just how out of touch these people are with mainstream Australians,” Mr Guy said.

The organisers of the ‘Invasion Day’ rally have been contacted for comment.

all it takes is 1 person or a few to make an idiotic comment and then the right wing media to pick it up and paint everyone who attended with the same brush.

Sensationalism and politically fueled barbs.
This is part of the problem of why we can’t “sit down and talk”.

The shame(s) of this situation being the twofold ambiguities:

Until these matters are clarified I see no problem worth pontificating over.

Australia as an institution is called into question harshly by the organisers because of all the damage to First Nations People it does and allows.

Strong language in the face of ongoing genocide is not “sensationalist” or 'idiotic". It is reasonable.

People are asking for a systemic change. For democratisation. For justice. For control over their own lives and for things like to finally be paid their stolen wages.

To clarify, my “sensationalism” remark was aimed at The Age, and “politically fueled barbs” was at the VIC opposition leader.

Ok, thanks for clarifying.