Similar to the gun topic.

Even if pirates are against nuclear energy, is it better to be transparent about the reasons, cost, unpopularity, long startup time, not proven in marketplace…

Would pirates support a trial of the more modern generation reactors?

Personally I am very much pro nuclear energy. It’s one of the major disagreements I have with the Greens.

My rationale for “No”…

It’s not about the technology we apply to fission.
It’s about human power structures, and time scales.

When we do technology where we can iterate rapidly, we learn fast on human friendly time scales. After the really obvious problems have been designed away, we mostly learn through failure and post-mortem analysis. This is QA Engineering 101.

Think what that means for different power technologies, in the face of unplanned catastrophic failure, like with earthquakes, floods, tidal waves, war, terrorism, stupidity, or whatever. Don’t underestimate stupidity.

If we’re talking solar, the worst case is that it just stops working or costs overrun.

If we’re talking fission, then we may leave large regions uninhabitable for centuries. Btw, fusion, if they ever get it to a commercially viable state, could be an entirely different story.

Coal is a slow-motion disaster, quietly killing thousands with it’s pollution as it slowly but surely heats the planet (there’s that thing again where we don’t learn long timeframe lessons well).

Tidal could be good. Just plain dumb engineering with the opportunity to fail early and often for maximum learning.

Hydro is more hazardous than it looks. All the good sites are taken. There’s risk of catastrophic failure that floods cities, conflicting water management issues and rotting organic matter of deliberately flooded catchment regions can produce more greenhouse effect (as methane) than the equivalent coal plant.

Now think about these things in the context of private industry, mandated to place shareholders interests above all else.

(I hand out enough likes that one is woefully insufficient to state how much I agree with this post.)

I’ve been in and around private industry for a few decades, and there’s just no fucking way I would trust any corporation I have known, to do anything complex involving fissile material. It’s a long series of crap-shots preceded by hand wringing and followed by arse covering or back slapping, depending on the outcome. Rinse, repeat, and eventually they get something repeatable.

Government is no better. The NASA space shuttle disasters were a classic example. The engineers actually knew the risks that caused the failures and had reported them repeatedly, but management kept deciding to launch anyway because of political pressure. It wasn’t a technological failure. It was a failure in their culture of quality, and that is as common as muck.

Is there anywhere in the world yet that has completed a long term permanent storage repository for nuclear fuel waste?

Of @jedb’s claimed ‘positives’ list, I would take issue with the validity of all those to some extent, except for the “plentiful fuel” item, that one seems pretty true.

10-15 years ago I would have said Yes on Nuclear, but that that ship has sailed.

Even if the technology itself is pretty safe/manageable, insanely energy dense, etc. it takes an insane amount of security and environmental protections around the plant.

Renewables are close to or already have become more cost effective in $ per watt than Nuclear, and that tech is only getting better and better by the day, this is the rapid growth industry, and it doesn’t take a lot of startup capital to do unlike Nuclear (and researcher can work way on their new fuel without needing an extremely secure bunker and government oversight)

And rooftop solar in particular is decentralised - less dependance on the government for energy supply.

Nuclear doesn’t make any sense at this point unless it’s for a space probe or some frozen almost uninhabitable area. Tesla are currently showing the viability in PRACTICE of powering Islands with Solar+Wind+Battery.

I know there was all the political upheaval in the past against Uranium etc. but ideological environmentalism is just not the issue anymore.

I recognise @AndrewDowning’s inside vs outside view argument from IRC. But come on, data, people. We need data. The thread’s still young and already we have too much FUD happening.

Of @jedb’s claimed ‘positives’ list, I would take issue with the validity of all those to some extent, except for the “plentiful fuel” item, that one seems pretty true.

The other points I’ll have to do some digging to get solid sources on. But for the moment:

That sort of thinking locks away all sorts of useful technologies as “too dangerous”. Including most theoretical FTL stuff.

And rooftop solar in particular is decentralised - less dependance on the government for energy supply.

Residential electricity use is well under a third of total usage. So centralised power is still rather necessary.

That sort of thinking locks away all sorts of useful technologies as “too dangerous”. Including most theoretical FTL stuff.

And we can look at other technologies as they come.

I don’t think that Nuclear is “too dangerous”, it’s extremely dangerous, but it can be managed. There’s just no future in Nuclear. Not only do we need to explain away all the dangers but it would be quite pointless to start pushing for it now when renewables can do the job cheaper and with much less startup cost.

Nuclear made sense last century, but now it is just simply economics which are working against it.

As too often I am smack in the middle here.

The technology of nuclear power generation is mature and no more dangerous than the next method (lets face it most of the gear is quite literally steam technology!)

On the other hand I agree the track record of running this stuff ethically, safely and (dare I say it?) conservatively, - including cleaning up after its useful life has run its course - of corporations is bloody appalling.

Seriously: may I have half a vote each way?

Gratuitous plug - I wrote about this back when Howard was rattling the can :

Broadly - I believe in the overall carbon and deaths/unit energy of Nuclear, but yes I’m concerned about the ability of human institutions to oversee it.

I’m lazy at this stage, but happy to discuss any thoughts people have in reply.

Good article. Australia was pretty gung-ho about nuclear generation up to Gorton and flipped to the other extreme with MacMahon, so in many ways Howard was a late-comer.

Otherwise I pretty much concur all points.

As best I can figure Australia hasn’t even seriously trained nuclear engineers since before the Chernobyl disaster, so we can hardly make claim to anything like up-to-date informed debate. (I know this ignores imported talent.) The old propaganda of both sides circulates on and on and… (not necessarily wrong but not progressing either.)

I recognise @AndrewDowning’s inside vs outside view argument from IRC. But come on, data, people. We need data. The thread’s still young and already we have too much FUD happening.

I didn’t think data was hard to find, but here you go: Nuclear and radiation accidents and incidents

A nuclear and radiation accident is defined by the International Atomic Energy Agency (IAEA) as "an event that has led to significant consequences to people, the environment or the facility". Examples include lethal effects to individuals, radioactive isotope to the environment, or reactor core melt." The prime example of a "major nuclear accident" is one in which a reactor core is damaged and significant amounts of radioactive isotopes are released, such as in the Chernobyl disaster in 1986.[ Th...

and here, Wikipedia felt the need for lists of lists … These are lists of nuclear disasters and radioactive incidents.

I am also cautious wrt the safety aspects of nuclear, especially in this new age of terrorism. But fundamentally i believe in the free market working out the cheapest technologies (which probably would be solar wind and storage) under the assumption of discincentivising uncaptured coal pollution cos it violates property rights including health rights.

But i guess i was trying to prompt about the transparency more than anything, mentioning it in the wiki, to appease the argument without supporting it.

Proven is from nuclear providing over 10% of world electricity production (twice that of renewables even now) and particularly high production in France, Belgium and Sweden.

That doesnt necessarily it is proven economically in Australia, which is why a trial might be good policy to make such arguments prove themselves.

Nuclear electricity generation is a waste of time and money. Nuclear research should continue, purely as blue-sky stuff. You never know what pure research might turn up.

The planet is awash with energy. We have only to harvest enough to meet our needs. For electricity generation, that’s where our efforts are more likely to produce results.

I’ll leave the last word to Mike Barnard. He’s pro-nuclear, but recognises that it’s a lost cause:
Why wind energy is the pragmatic choice, and nuclear isn’t

Nuclear isn’t free market, you need nation-state resources just to secure one of those things, let alone getting access to the underlying technology. Can you put a $ on military & intelligence resources being tied up by the project?

If Nuclear was economically viable, why aren’t private companies knocking on our door to build anymore and instead we got Solar, Wind, Battery Storage, Hydro, Gas companies wanting to build

There seems to be one particular coal company going forward while others are pulling out, but that deal stinks to high heaven and seems to be politically motivated, and certainly not free market with all the subsidies, favours and loans.

Meanwhile the solar/battery industry has such a low barrier to entry, it’s happening on a consumer level without government help

If we make a statement/position/policy on nuclear, it would only show how smart we are, but there isn’t and there isn’t likely to be a nuclear debate put on the table again.

As incredible as the technology is, it’s just too big to do and the international market is well covered. we got other things we could do on a nation level like give the space agency something to actually do. We we build/launch long distance space probes/capsules another country can supply the nukes for us

I agree.
But don’t you think transparency is better?
You can make that argument simply like you have.
Otherwise people will think its viable option that youve not considered.

But don’t you think transparency is better?

I don’t think that putting resources into making a policy on every little thing under the sun is needed for ‘transparency’, we still to our principles for cases which we don’t have anything explicit and can make it explicit if the issue comes up. Doesn’t make sense to make policies on Favourite Ice Cream for example.

well i agree about the ice cream haha.
nuclear still comes up in debate with liberals/conservatives thats why i think its good to pre-empt it.

Honestly I don’t get why people talk about nuclear energy in the context of the Australian energy market. It is commercially unviable and uncompetitive compared to all other energy sources. 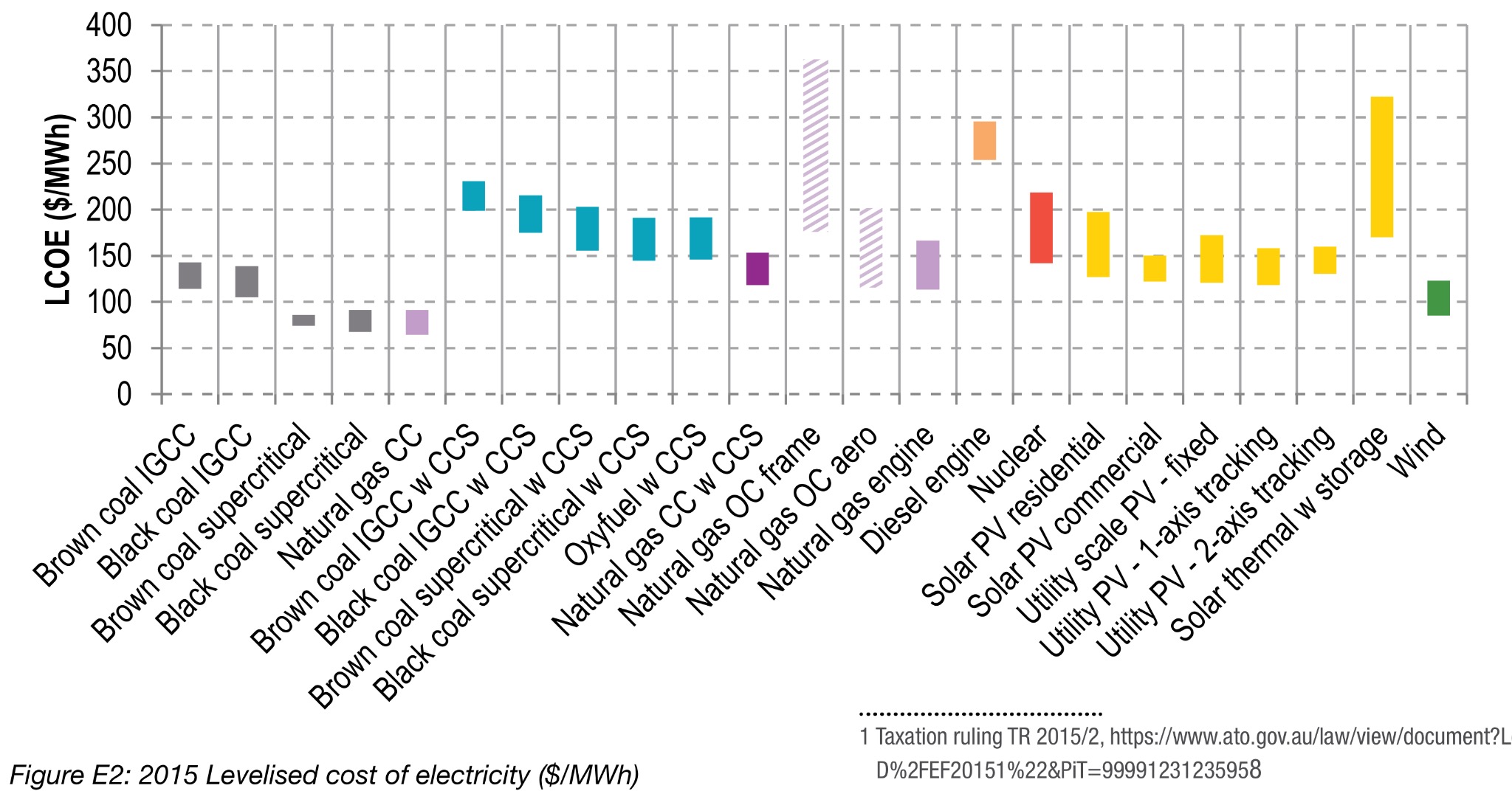 I’m not anti-nuclear, so at face value I have no problems lifting the ban on nuclear power. However, once you take into account that in practice the private sector never socialises all its costs (especially insurance) adequately, I am highly skeptical towards the private sector running nuclear generation given the operating company is not democratically accountable to population through government. Shareholders can run off with short term profits and leave others to clean up the mess later.
So on this basis I am very skeptical towards allowing private operators of nuclear energy. Given also it’s not privately competitive or profitable without massive public subsidises (which we could be giving to renewables) personally I’d prefer to continue the ban on this basis.