The Western Australia state election is scheduled to be held on 11 March 2017.

I want to start a discussion about registering the Pirate Party in Western Australia to run candidates in the 2017 WA State election and specific policy platforms to take to that election.

I have some policy ideas (to start it rolling), mainly focused on regional WA that I think will make a difference to rural voters (I live in the electorate of ‘Central Wheat-Belt’) .

Key Points - Amend bill to state "Meta-data retention is only required when a warrant for the capture of the data has been sort and approved, all other data retention is optional but only with the direct consent of the user."
Tags - Telecommunications , Data retention, amend

First off, I applaud you for taking the initiative on this.

I’m just including information on the registration process in WA so that a timeline can be worked out.

Of these, I think getting the 500 members before 1 November will be the hardest.

What Mozart said, plus:

Interestingly, there appear to only be a few parties registered for WA state elections at present: big three, Family First, Christians, and Shooters. This despite the legislative council running by region-based proportional representation, 6 members at a time, with what appears to be a near-identical voting method to the now-former Senate GVT system (in that it has GVTs and you need to stand two candidates for a group). Nomination deposit in 2013 for the LC was ‘just’ $250/candidate. Other interesting requirements: candidates must have been a WA resident for at least a year.

So the membership requirement seems to be by far the hardest. It looks like they still rely on paper forms, too.

Thanks. Yes it does seem that getting the 500 people on the list before Nov will be a challange. Is there state by state break down of PP member numbers?

Current membership numbers aren’t published, but @Feenicks or @Fletcher should be able to provide them.

These are the state by state figures for this time last year, obviously it will have changed with 12 months worth of new members, but proportions are likely to be close. I havent had a chance to run the state by state numbers for this year yet, but will be doing so before congress. 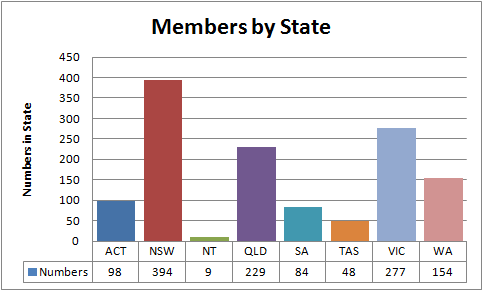 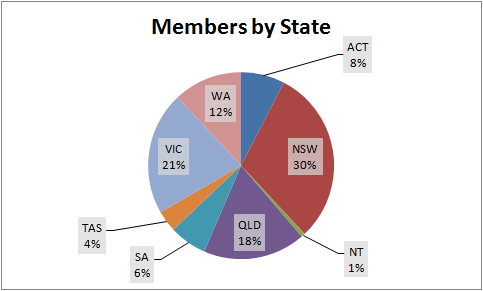 @AndrewDowning Do you have an update on the membership figures for Western Australia? I am wondering what the chances are of running candidates in WA for the 2019 federal election? Also, would those candidates only run in the senate and not the house of representatives?

Where we run candidates is basically a function of where we have people. Usually Senate to maximise potential voters.

We’ve run in three lower house electorates from memory; two were by-elections and the third last year (@JohnAugust was keen).

Also, I expect the next general election to occur in just over a year. See Antony Green a few months ago for why.

@alexjago Thanks for the reply

As for WA specifically, we’ve run there twice - Senate redo 2014 and the Canning by-election.

As for WA specifically, we’ve run there twice - Senate redo 2014 and the Canning by-election.

Which doesn’t answer my 2019 election question. I have taken a closer interest in the pirate party due to Jesse Herman’s advocacy of the Job Guarantee, it’s a policy that is important to me.

Not bad. Cross referencing those figures with state population percentages and taking into account electoral systems and quotas, we are best positioned at the moment to contest WA Senate and Tas Senate elections.

There isn’t enough information to predict state possibilities, but NSW and WA Legislative Councils along with ACT and Tas Legislative Assemblies all have potential for various reasons.

That was intended to demonstrate that we don’t have anything against WA, just limited resources.