After what can be politely described as mixed reviews from our memes thread yesterday, I thought it would be a good idea to explain the approach we thought we would take to the election.

Unlike a major Party or a Party with corporate backing (maybe they are the same thing) we can’t hire slick marketing gurus to make professional election materials. Everything we will use for the election will come from volunteers donating their time and energy.

We are faced with tough decisions, do we produce very little and have a high quality content filter? Or do we give members a free hand to produce what they think will work and rubber stamp anything that is clear, not offensive and legible? We opted for option B. Whilst this does open us up to criticisms of being unprofessional, we will create a lot more content, some of it will stick, some of it will fail.

I would like to point out this was not an ‘advertising campaign’, it was a collection of memes that were approved to pass archaic electoral laws. They were made for members to share if and as they wished. To quote one of our defenders from the Reddit thread:

yuridez: Not an election ad it seems. The story is (as far as I can tell) that the pirate party had a thread on their discussion board where people were discussing possibilities regarding materials that people could easily share on social media. A bunch of brainstorming happened and lots of stuff was made by random people, and everything made was okayed by the party to share if anyone hypothetically wanted to. So this was just part of a random grab-bag of quickly thrown out ideas people had.

And then it was posted here and everything was un-okayed to prevent anyone from getting the wrong idea, since this isn’t exactly some kind of meticulously considered advertising campaign.

Whilst the comments may have been largely negative, I view the over 300 upvotes to mean that the meme was a success. What is worse than people saying bad things about you? People not talking about you at all. I realise there are conflicting views about negative press (or comments). I belong in the camp that any publicity is good publicity (within reason). So to me, this was a success.

Some of the people writing negative comments stated quite clearly they weren’t going to vote for us anyway, some were probably members of other Parties wanting to have a dig at us. I comment on articles and slag off the majors all the time, surely people from other Parties do this too.

I think we should forge ahead with dodgy memes, and better ones, and policy statements and press releases and podcasts. The more election materials that we produce the more hits we will get.

Council should appoint someone to run the strategy for the campaign.

Educating every single member that disagrees with a plan or balks in the face of the first bit of minor resistance on the nuances of marketing and community building in the socially connected digital world is not something that is achievable while running the actual campaign at the same time.

At present we are scattered in our approach, which will please no one win no extra votes but make a few current members feel that it was consultative but they still don’t like what we do anyway. Whats the outcome we are aiming for?

TLDR dont care what the strategy is, we just need one, not discussions about having one. We should debate that then make it happen. Done.

The outcome for the campaign?

We want to get more members active so we are capable of doing more politics between elections and getting active at local government and State levels as well as Federally. In terms of votes, better than the last election, which was 0.6% where we weren’t running against the Wikileaks Party. If we got over 1% this time I would be happy.

We are going to have a solid strategy debate on Monday at the election committee meeting, now that we have candidates.

What would an “Election Publicity Strategy” look like? Roughly. Basically.

What is worse than people saying bad things about you?

People leaving the party out of sheer embarrassment?

What is worse than people saying bad things about you

300 upvotes is fail? It trended all day. I don’t go on Reddit much, but we never get that many retweets on anything.

Do any of you have any better ideas how to do things? Or would you prefer we did little to nothing?

I prefer we stopped using dismissal as a metric for success.

Since when were upvotes dimissal?

When it comes to content, upvotes are for visibility. The comments speak for themselves.

The core issue is leadership.

Use of Asymmetric social media publicity strategies would be considered cutting edge and best practice for an organisation like ours to make maximum impact to targeted demographics with low resources.

The issue we have is accountability and authority. You cannot run a fast paced differentiated strategy without clear authority to make decisions. By its very nature a lot of those decisions are going to be controversial and some of them fail.

The naysayer attitude is just bullshit. Did you offer to be part of the campaign committee? If not STFU about quitting the party, or grow a pair and actually quit it. Labor, Libs, Greens all have line members that disagree deeply with their publicity campaigns, but buggered if they wont follow the party line and commit to it. They had their chance to influence it earlier. But now decisions are made. This is not an academic learning exercise for group input. That should have done weeks ago. The election is live.

I fear we will get mired in debates about this tactic vs. that tactic and miss the whole point.

This isn’t naysaying. Nor is there a threat to quit. It’s a sincere concern that we’re chalking up failures as successes. If you don’t want input anymore then so be it.

300 upvotes is fail? It trended all day. I don’t go on Reddit much, but we never get that many retweets on anything.

Do any of you have any better ideas how to do things? Or would you prefer we did little to nothing?

Of course this was a disaster. Those 300 upvotes weren’t “oh wow isn’t the pirate party great” upvotes, they were “holy shit look how hilariously terrible and incompetent this attempt at marketing is, the pirate party are a joke” upvotes.

I would have thought this was clear based on the comments. I don’t really agree with other interperetations of how this went, and PP members like yuridez who made valiant but late attempts at damage control did little, because the damage had already been done. While bad publicity is sometimes better than no publicity, this publicity was so terrible that no publicity and a clean slate to have a real attempt at wooing the r/aus population would have been preferable. But that ship has sailed.

Just being honest and realistic about what happened. I think we should be able to recognize things like this for what they are so we can do better in the future, instead of deluding ourselves into thinking this was great and patting ourselves on the back for the Pirate Party name being trashed.

Short answer, So What?

At worse a couple of hundred trolls on the internet went “Nah nah nah”.
Of the ones who are Australian voters whose opinions even remotely matter, statistically most will be die hard ALP/NLP/Greens voters who would fling the monkey stink regardless of how awesome our memes were.
Even if 500 people saw and hated the meme and they all lived and voted in QLD with the least voters to concentrate the hate it would still be only 0.016% of the vote we had lost assuming there was any chance they would have picked us in the first place

Reddit is one of the most receptive communities when it comes to the whole meme appeal. If they think it’s bad, then what exactly do we stand to achieve by continuing the same strategy? I dare say that if we had “awesome memes” they’d get a kick out of it. But we don’t, and they didn’t.

Regardless, the point we should take a way is that we need a metric for success. We can’t assume that big numbers = win. Sometimes those numbers mean we dun goofed (how’s that for a meme? :P)

For every commenter, positive or negative on Reddit, there are probably another 100 lurkers.

The reason that there’s “no such thing as bad publicity”, is that it serves at an opportunity to put our message in front of many hundreds of eyes as it stands up to scrutiny by doubters.

This is a good thing. People have to witness us standing up for our platform and they did.

That really depends, do you really want to cement us as a ‘joke party’? It’ll get us some hits, sure. But I doubt it’ll translate to votes let alone long term members.

In fact, do we have stats for membership during this psudo campaign? 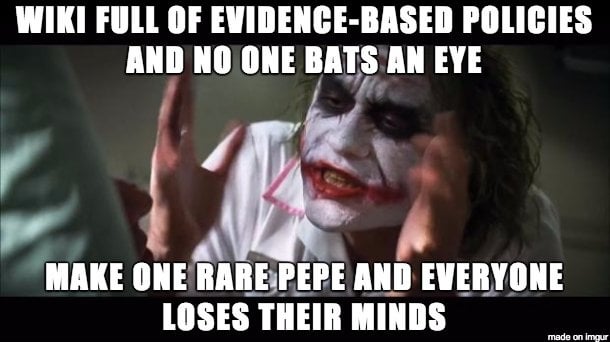 The meme criticism was a storm in a teacup. The campaign rolls on.

The Sad Keanu meme got used successfully with the NBN raids debacle:

The current plans for the NBN make you sad? Us too. Vote for a world class Internet #VotePirate #AFPraid https://t.co/C1uvfKWONA 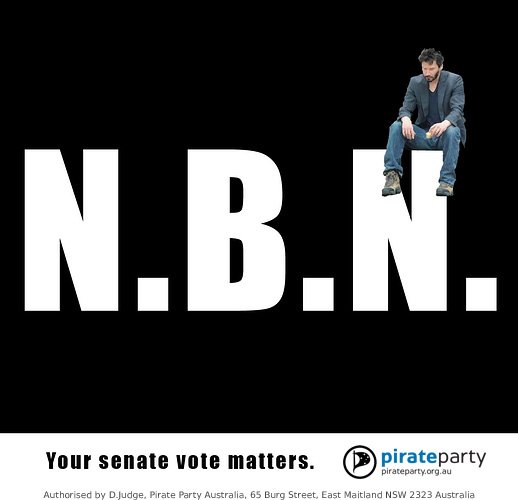 We gained somewhere around 6 members since the election was called, and lost about 3. One of which went to campaign for the LDP. That seems to be about the normal rate, give or take.

Using the publicity of the meme as a sucker punch to then raise awareness of depth of issues I thought was a great approach to getting visibility and building up respect for the party as being serious (but a little fun as well).