Across Queensland, there has been growing resistance to the proposed Carmichael coal mine operated by Adani. It’s difficult to measure exact support but pollsters are predicting it may be a deciding issue for on the fence urban voters. Rallies, flyers and stickers have been popping up around Brisbane increasingly for the last 18-24 months and since Premier Annastasia Palazscsuk’s announcement of the election on Sunday, StopAdani activists have been popping up multiple times on her election tour around Queensland. 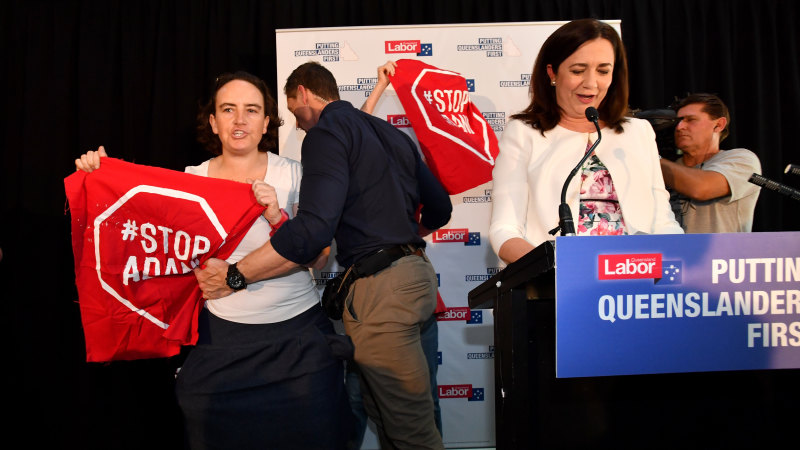 The Premier's first official campaign event was hijacked by protesters joining her on stage to demand the Adani coal mine be scrapped. 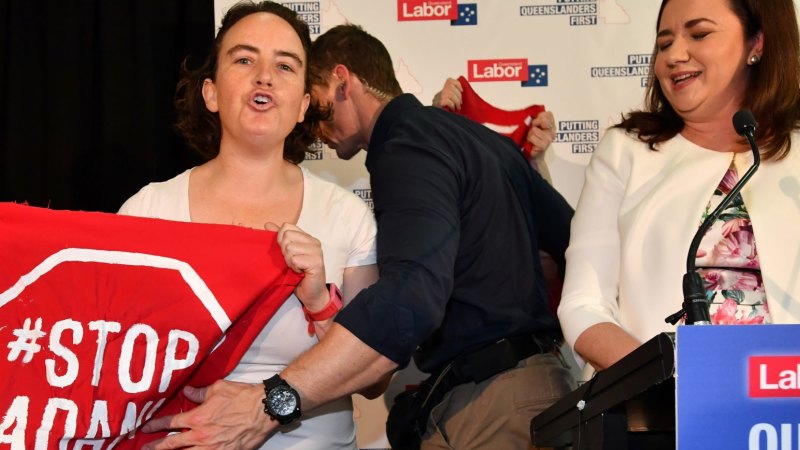 Security guards had to tackle one protester who tried to interrupt her television interview.

In 2014 changes were made to the Environment Protection and Biodiversity Conservation Act 1999 so that the government does not have to consider expert advice before approving major developments such as mines and ports. Ironically, the Federal court overturned the initial approval because the Environment Minister Greg Hunt had not assessed the impact on 2 endangered species in the Galilee basin. Later, it was found a third endangered species was also placed at risk by the mine proposal. 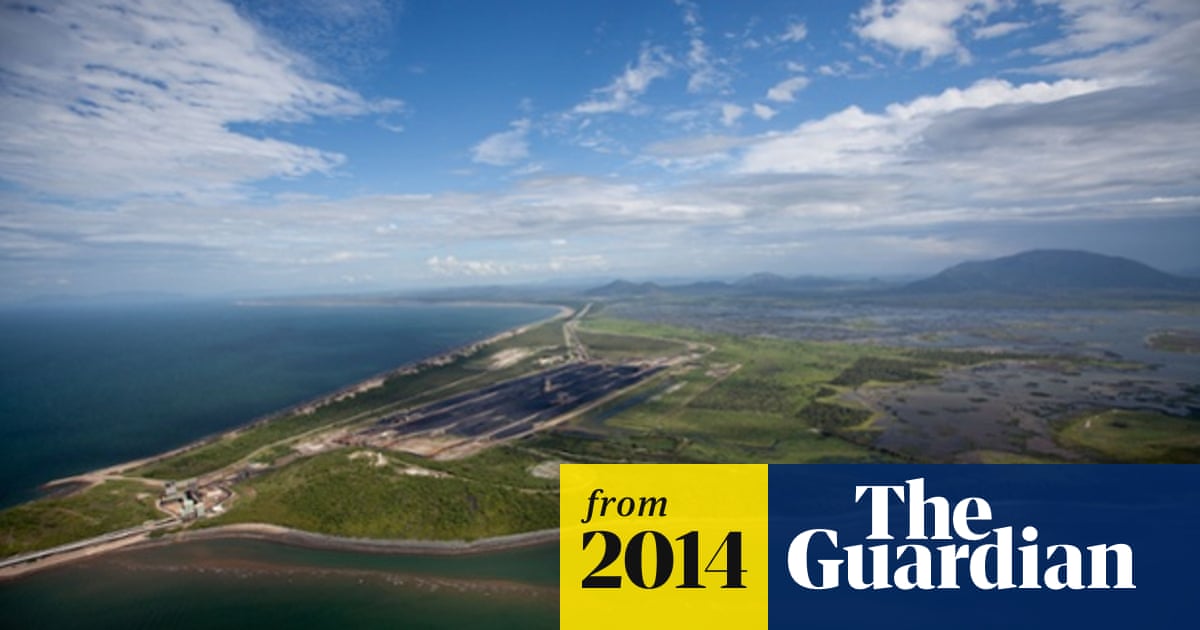 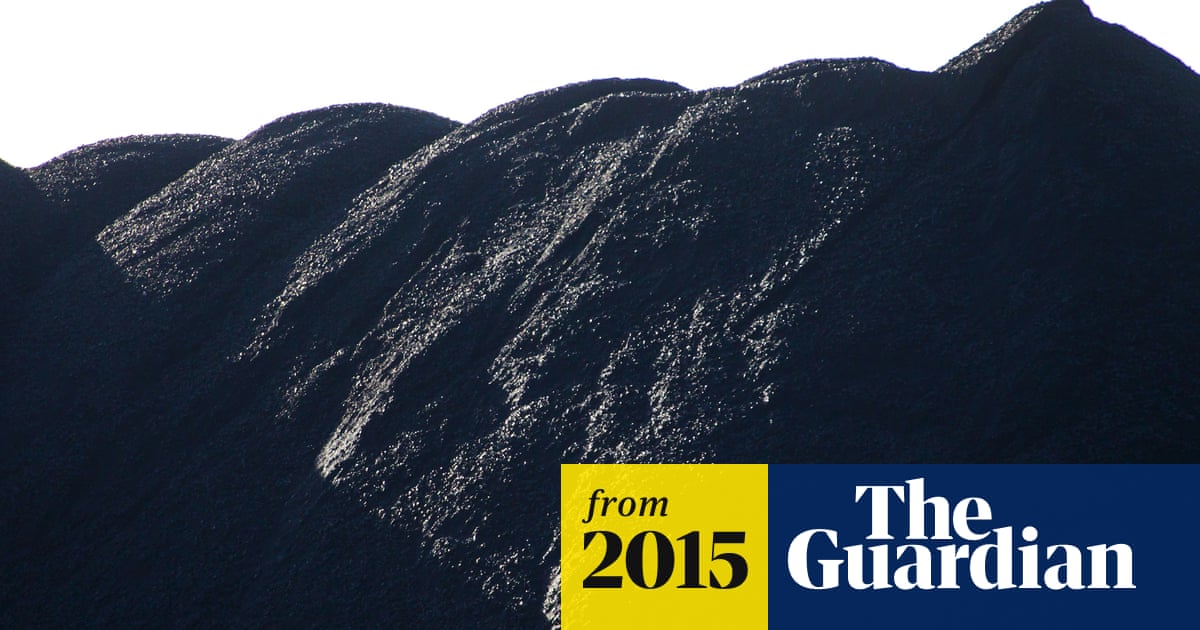 Coalition will take six to eight weeks to revise its Carmichael coalmine... 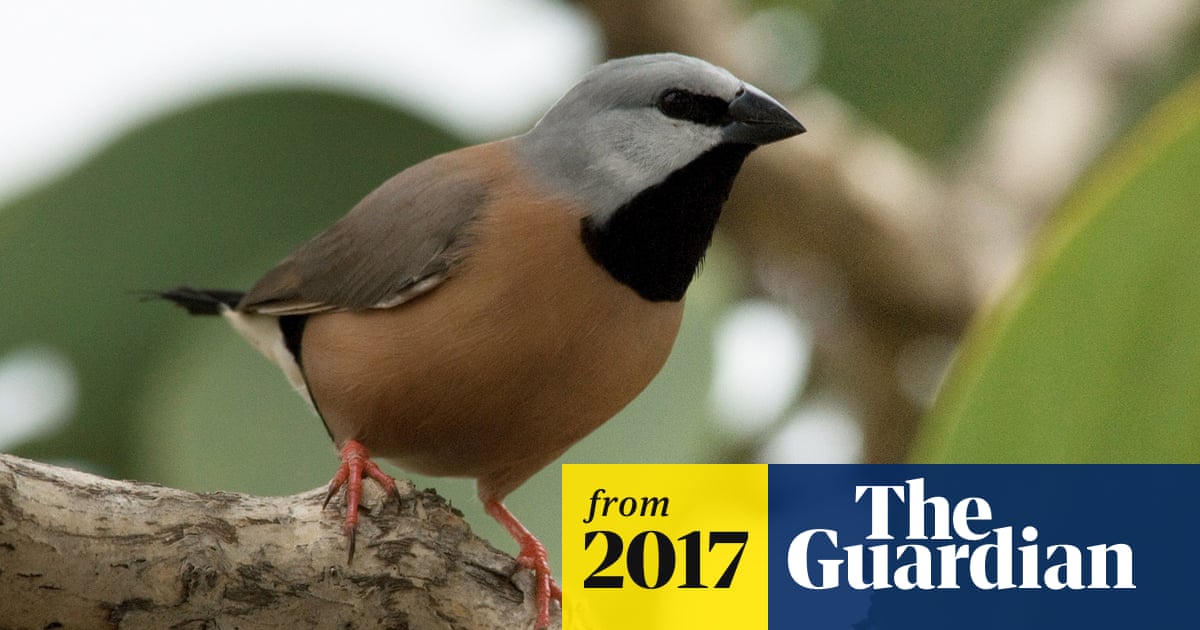 The mine is opposed by the traditional owners of the Galilee Basin, the Wangan and Jagalingou people. Adani launched legal action with the Native Title tribune in 2015 to get the state government to compulsorily acquire the land and allow the mine to proceed. The court action is based on the premises that the mine is in the “public good” and that the spokespeople for the Wangan and Jagalingou people is not authorised to speak on their behalf. The High Court eventually ruled against Adani, however not before AG Brandis attempted to delay the ruling for an amendment to the Native Title Act to go through which would make it significantly easier for land use proposals (such as Adani) to be approved under the NTA. From what I can tell the amendment has been passed by the federal House of Reps but not the Senate yet.
http://wanganjagalingou.com.au/our-fight/ 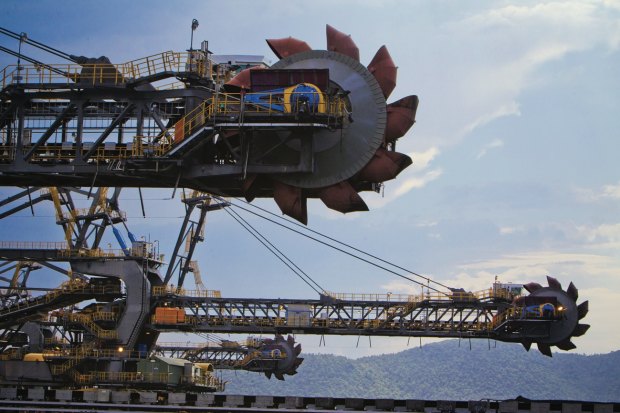 Native title battle shaping up over Adani coal mine

Indigenous land holders are mounting a challenge to Australia's largest coal project and are calling on Queensland's Labor government to refuse a mining lease to the Indian company developing it. This article has come in from Adrian Burragubba of the Wangan and Jagalingou Traditional Owners Council The Attorney General, George Brandis, has intervened in a...

Opposition to the mine has been consistent since the early days of the proposal, where an activism campaign led Premier Palascuk to promise and follow through with a ban on dredging within the Great Barrier Reef Marine Park. The creation of Adani’s Carmichael mine will lead to an expansion of coal shipping through the GBR carrying with it an increased risk of coal spills and ensuing environmental damage. Queensland Labour was also at one point considering a waiver of some of the royalties Adani would have to pay on the new mine.

New plans to ban dredging on the Great Barrier Reef and dump dredge spoil on land won't save the reef.

Queensland's Cabinet is yet to decide whether there will be a royalty break for Adani's Carmichael mine, but the Opposition says a factional battle between Premier Annastacia Palaszczuk and her deputy has emerged.

Australian banks have refused to finance the mine. 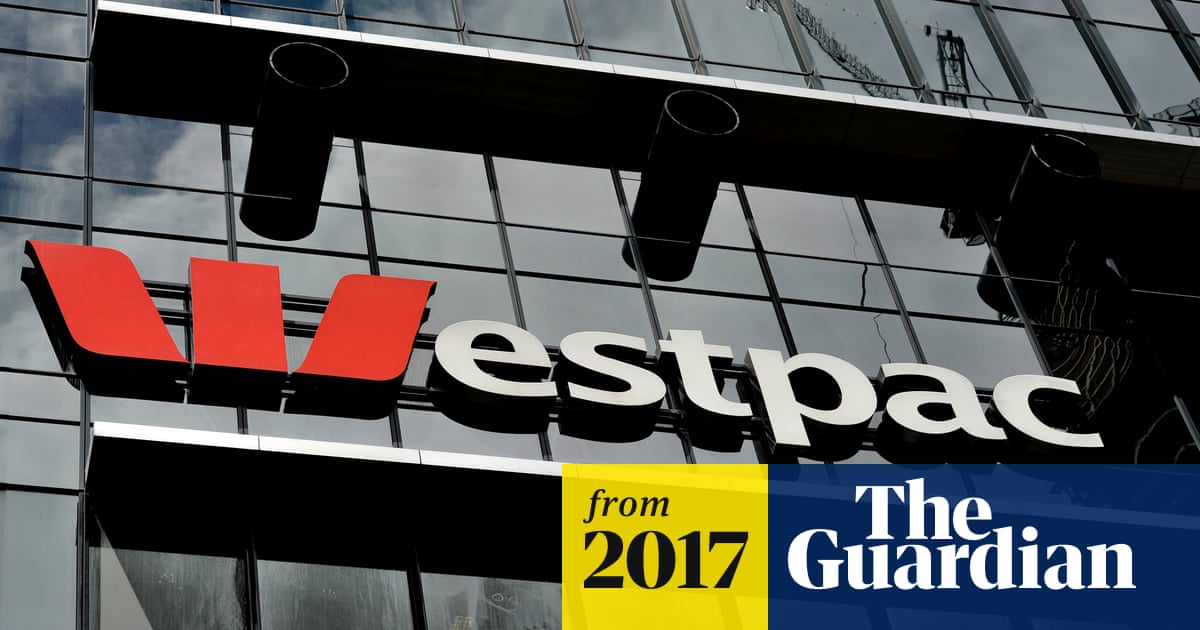 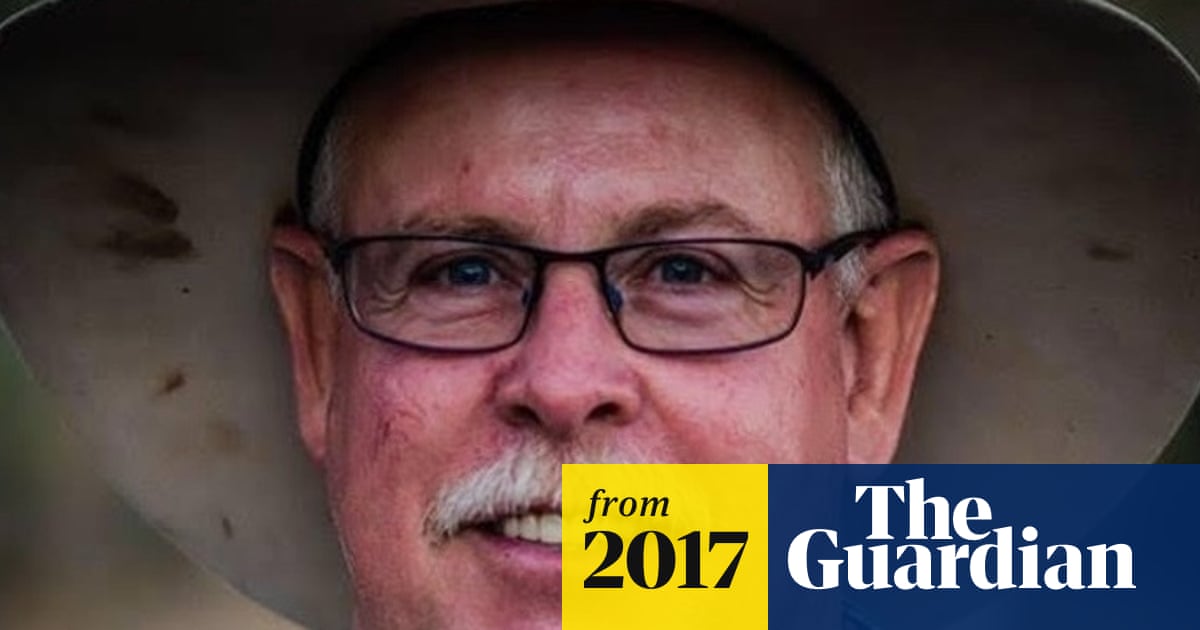 We should support StopAdani, this project stinks in every way possible

I support the campaign against Adani. If Queenslanders are motivated I am sure there are a range of community groups campaigning against it. It is good to do some community campaigning with broad coalitions.

this issue is opposed by many libertarians too including Alan Jones if you consider him one.
But the argument from libertarians is that you should get your loan from the bank like the rest of us and not come running to the government for a loan which is basically crony corporatism, even before you consider the companies track record and the fact its not even an australian company.

I can not think of a single viewpoint would be in support unless they were directly receiving money in their pocket from the deal.

I can not think of a single viewpoint would be in support unless they were directly receiving money in their pocket from the deal.

Overall I suppose the best thing anyone could do for Adani is to make a solid counterproposal which would generate the same 1500 jobs (yes, it’s that few) and a similar amount of export income (which would be significantly larger). It would provide some counterargument for the government and the community to unite behind. Does anyone know any possible candidates?

The 1464 jobs figure quoted by Adani was a properly sourced update from their earlier exaggerated 10,000 figure. Resourcing is on relatively short boom/bust cycle as well so we can expect those 1500 jobs, if accurate, to only be temporary.

Instead of an alternate jobs program however, I propose we consider the jobs we’ll probably lose if the Carmichael mine goes ahead - tourism (primarily Great Barrier Reef) which is estimated at $500mil and entirely local http://www.abc.net.au/news/2017-11-01/reef-tourism-spending-promised-by-premier-amid-ongoing-adani/9107722 I saw a figure that quoted 69,000 jobs at risk by the mine but wasn’t able to source it.

Perhaps a little too contentious; I was hoping we could come up with something purpose built for the site.

The docs is divided into a few sections including problems with adani, system requirements and of course the solution; any contribution would be great!

I don’t know how edit access works with Google docs, (i.e. if it’s possible to open edit access to all PPAU members without doing individual requests), but I’ve sent a request for edit access.

Sorry! I accidentally set it as view only instead of edit with link.

You have permissions now as well - Cheers

Perhaps a CLARA type project connecting Brisbane to Cairns and Darwin? We’d still need to figure out where we’d get water for these new cities though.

This is the right sort of idea, although I’d argue you don’t really need to consider the export income unless you’re thinking national politics rather than state politics. Export income is more of a benefit for the Feds since it boosts the exchange rate, tax revenue, and means they don’t need to distribute as much to QLD via interstate transfers (including lower tax revenue, higher welfare expenditure and lower GST share).
The irony here is the sort of favouritism shown to mineral exports and boosting export income (and the exchange rate) from natural resources is what contributed to the demise of the car manufacturing industry. These funds could be invested in so many more useful things. Infrastructure Australia probably has a decent list.

A legal objection to proposed Carmichael mine was heard in the Queensland Land Court over five weeks from Tuesday, 31 March 2015. More information is available here. The Carmichael Coal Mine and Rail Project is a 60 million tonne per annum...

According to here, Adani can’t make the mine profitable unless coal prices spike. So honestly for me this problem is functionally solved - ?

I mean there’s no financial incentive for Adani to implement this mine, according to this site - what is there left to do really? Is the final goal to make it impossible for him to develop the mine regardless of future economic conditions?

I think the goal is to prevent him from developing a loss making mine using government subsidies, among other reasons for stopping Adani.

I saw a headline this morning about Adani possibly securing funding from China sources which would then jeopardise prospects of local jobs, but it seems to have been hinted in this one.

Experts say Chinese government financing would inevitably come with conditions requiring materials to be sourced from China, further undermining the credibility of Adani’s claims the project will bring jobs to Australia. 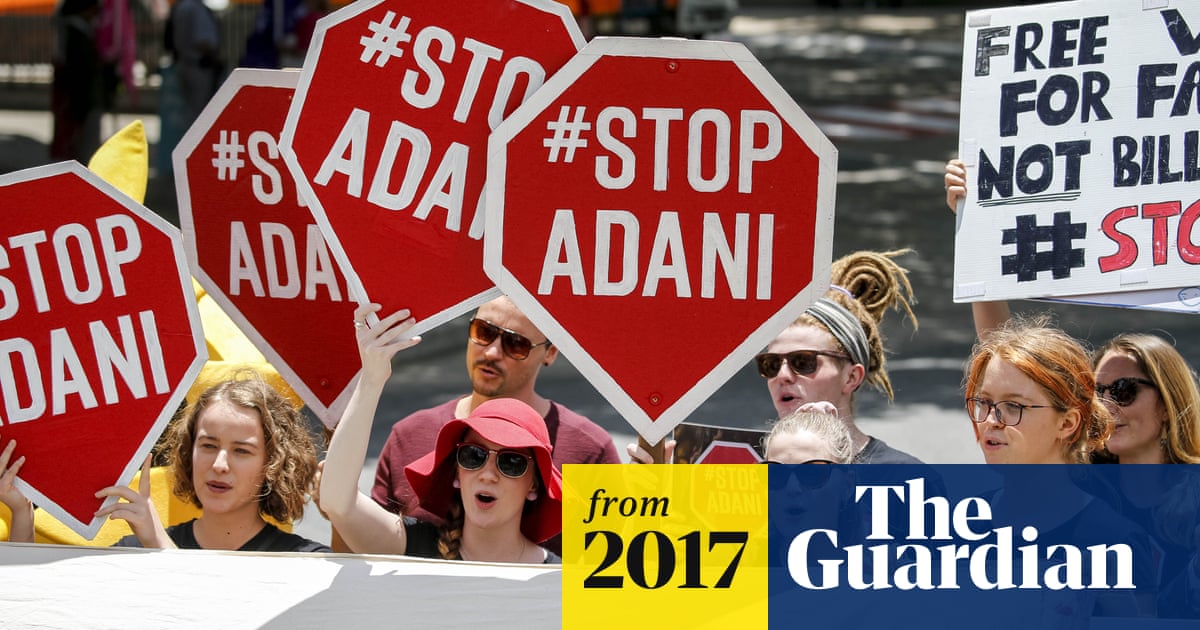 So is a counterproposal based around renewable technology still in order? I could pull something together: Build a solar collector over the Adani site, build a High Voltage DC line to the coast, then build a plant which uses that energy as well as the Sabatier reaction to produce Methane (Natural Gas) from CO2.

The Sabatier reaction or Sabatier process was discovered by the French chemist Paul Sabatier in the 1910s. It involves the reaction of hydrogen with carbon dioxide at elevated temperatures (optimally 300–400 °C) and pressures in the presence of a nickel catalyst to produce methane and water. Optionally, ruthenium on alumina (aluminium oxide) makes a more efficient catalyst. It is described by the following exothermic reaction: It has been proposed in a renewable-energy-dominated energy system t...

That would be great! We’d love to build a state platform as something to campaign around but most of our focus is local activism.

Coal prices have risen since 2015 https://ycharts.com/indicators/australia_coal_price one reason I’ve seen cited is increased demand from China’s continued push for industrialisation.