Continuing the discussion from Should there be a limit on the number of children one person can have?:
Last night’s Four Corners and Q&A focused on population. It seems most Australians feel that there are enough of us - we don’t need any more people. I reckon we can’t sustain the numbers we have for much longer.

Discussion centred mostly around things like economics and infrastructure. I reckon the environment is what will bite us, but that got surprisingly little attention.

The last ten minutes of Q&A are quite positive. If we’re to reduce our immigration intake, then perhaps we can compensate with foreign aid - encouraging people to stay where they are.

Population is a minefield. Do we want the Party to have a policy? If so, what should it be?

For context regarding Q&A

Should there be a limit on the number of children one person can have? Policy

Pros: Is fairer for other families who responsibility make enough children to care for. Ensures the right of the child to have a family with enough resource and emotional support. Limits welfare strain. Cons: If set too low, leads to population decline. Limits freedom to choose maximum family size. May go against religious freedom to have as many kids as possible.

For context regarding Q&A

I recall reading somewhere that sustainable water resources can only support net immigration levels of about 40k p.a. Anything larger than that and we will have to build expensive desal plants, and Australians will be paying for them, not just the people immigrating here.

There are undoubtedly limits to what the country can sustain in perpetuity. Water is one. Perth, for example, hit that limit more than a decade ago. It now relies on desalination for about half of its water supply. I reckon the Murray/Darling system is telling us something, as well.

Australia’s saving grace might be our abundant renewable energy resources. 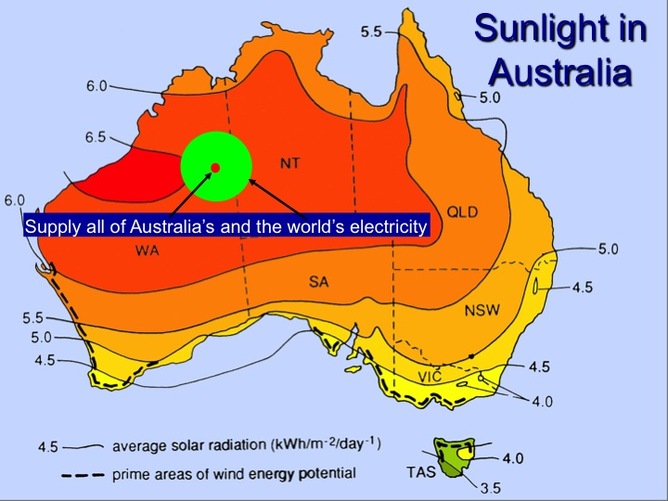 source.
That could power a lot of desal plants. Then, of course, we’d need to deal with the concentrated brine that the plants put out as waste. Every solution has its problems.

I stand corrected, the numbers are 50k p.a:
https://www.macrobusiness.com.au/2018/03/scientists-rapid-population-growth-wrecking-environment/

Only NOM levels of 50,000 pa or less result in Melbourne and Sydney maintaining a small surplus of net surface supply over demand on average out to 2050, assuming current climate conditions persist. Potential options to alleviate water stress at high NOM levels over the longer term may be hard to find.

Take care with your sources, Jessie. Macrobusiness is, as the title says, a business site. Business has no clue about operating in the absence of growth, so growth is assumed. That might tend to put something of a slant on what it publishes.

Come to think of it, that might be another avenue to investigate. How can we run an economy in a stable or contracting market environment?

I think there are a few potential avenue of dealing with contracting populations.

There is others each with their pros/cons, but those are the immediate topics that springs to mind.

Take care with your sources, Jessie. Macrobusiness is, as the title says, a business site. Business has no clue about operating in the absence of growth

David I think you should check out Macrobusiness, I think you’ll like it. It’s anything but “pro-business”. They’ve been calling for cuts to the population ponzi for years, nationalising the gas cartel, the absurd housing bubble driven by govt policy etc. It’s one of the best no bullshit media sources you can get in Australia.

I’m skeptical on the ability for this to deliver significantly short of cybernetics.

Yes Japan is investing in this last I checked.

Immigration of only younger people

The Productivity Commission found this doesn’t help, because immigrants themselves age. It only works if your immigration program keeps accelerating in a ponzi like fashion, which is unsustainable.

This is effectively what the Family Tax Benefits are supposed to do. However I think the FTB could be improved if we increased them and reduced the effective marginal tax rates to turn them into UBI type payments - where every family gets the same pay out, so women are not severely punished with reduced welfare for going back to work.

… I think you should check out Macrobusiness, I think you’ll like it. …

I did (before I responded originally). I don’t. It buys into too many of the assumptions that got us into this mess.

While researching the economic issues of a stable or declining population, I came across this [in Wikipedia]:

Since the 1970s, most metrics have provided evidence that the workings of the world economy produces results that exceed long-term limits to economic growth. According to the ecological footprint measure, earth’s carrying capacity—that is, earth’s long-term capacity to sustain human populations and consumption levels—was exceeded by some 20 percent in 1990. By 2015, this figure had increased to some 60 percent. In effect, humankind faces planetary overshoot-and-collapse.

The figures are less pessimistic than my own, but broadly consistent with my observations over more than half a century. The reference to the 1970s rang a bell. That bell was, of course, The Limits to Growth.

When that report came out, I was in my twenties. The very mention of limits provoked manic opposition. Those attitudes persist, it seems.

I’m skeptical on the ability for this to deliver significantly short of cybernetics.

The projection might be questionable, but the data points are revealing. 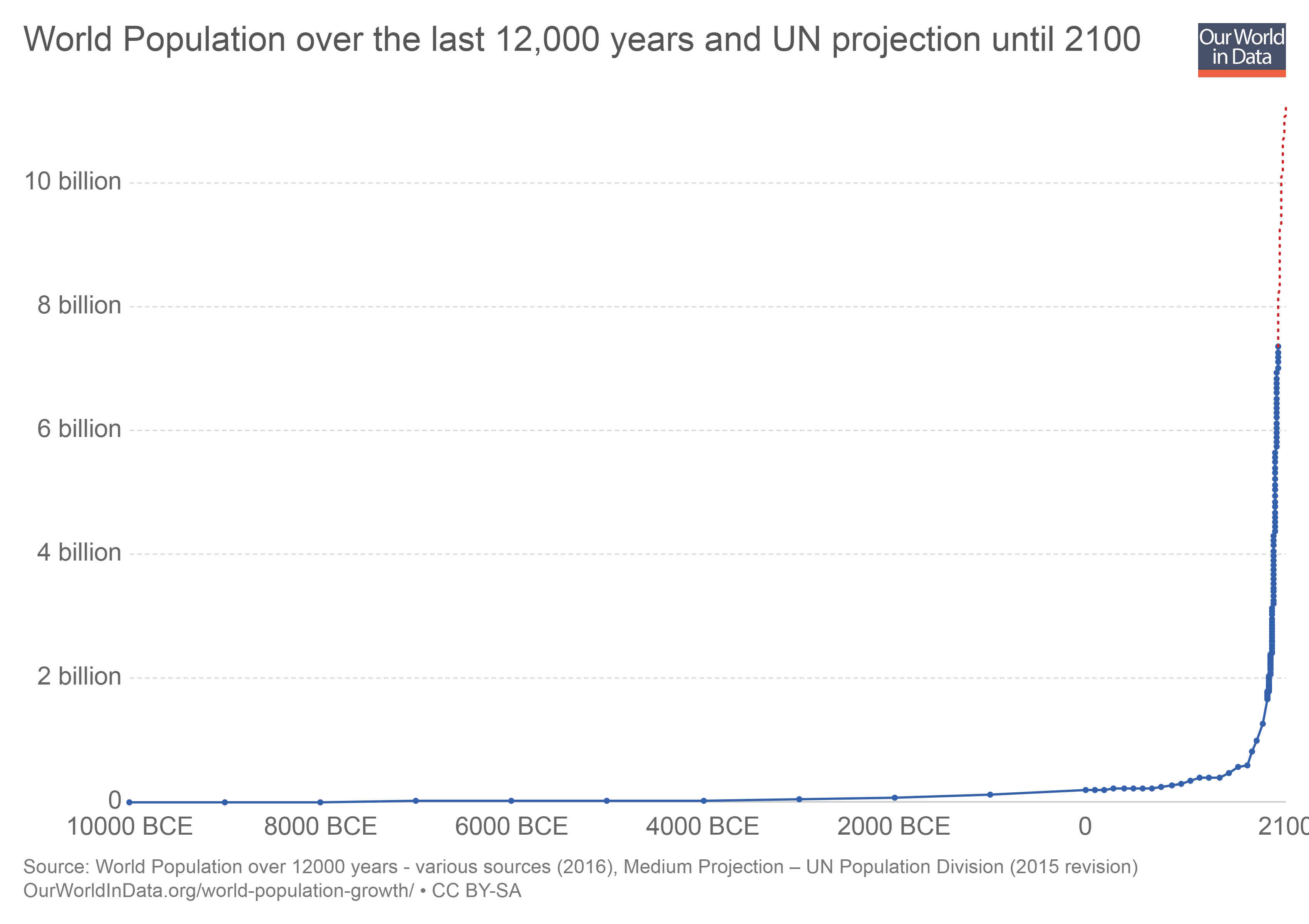 The question is; how many can the planet sustain in the long term? My guess is about 2 billion.

Regrettably the data points are revealing. Convenient thousand-year intervals from 10000BCE to 0; dense thereafter? Signs of propaganda not data to me?

I am not particularly against your conclusions but based on this? You are doing yourself a grave disservice.

No. As I’ve said before, my guesstimate is based on a lifetime of observation.

So in other words the graph is worthless. Why bring it up at all then? You are both weakening your argument and burning up whatever support you may otherwise have. I am no longer interested in following this thread - was that really your intention?

Think it through. What data would be available? Might it have been necessary to reconstruct past figures? If you have a problem, consult the source.

So in other words the graph is worthless.

I view it as worthwhile context.

I am no longer interested in following this thread …

No need to get emotional.

It’s almost as if you’re trying to bully me into silence.

No need to get emotional.

It’s almost as if you’re trying to bully me into silence.

I drew attention to the weakness of your presenting that particular graph to support your argument as a kindness in hopes of preventing you making a bigger fool of yourself.

However on reflection regarding your response: No I definitely do not want to bully you into silence — rather, carry on!

I shall try not to laugh when somebody starts pulling up the many alternate population-projection graphs implying quite other conclusions to limitless growth — so easily located using this newfangled thing called the Internet.

… the weakness of … that particular graph …

If you have a problem, consult the source.

You are both weakening your argument and burning up whatever support you may otherwise have.

What argument? Support for what?

Do we want the Party to have a policy? If so, what should it be?

To me, it looks like the answer to the first is ‘No’.

If you have a problem with the historical data used to compile that graph, then provide data that’s more consistent with your beliefs.